skip to main | skip to sidebar

Well as some of you know, I'm still practicing for Evan's upcoming birthday festivities so I made some vanilla cupcakes on Friday to see how they tasted and also to test my butter cream frosting recipe to make sure I have no last minute disasters! 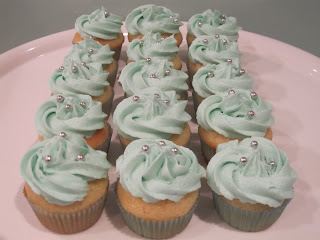 Beat the butter, sugar, vanilla, lemon zest and pinch of salt with electric beaters until pale and fluffy. Add the madeira (optional) and beat until well combined. Add the eggs one at a time, beating well after each addition.

Sift flours together and using a wooden spoon, fold the flour and milk alternately into the sugar mixture.

Beat the icing sugar and butter together with an electric beater or stand mixer with paddle attachment on medium-slow speed until the mixture comes together and is well mixed.

Turn the mixer down to slow speed. Combine the milk and vanilla extract in a separate bowl and add to the butter mixture very slowly. Once the milk is incorporated into the mixture, turn the mixer up to high speed and mix for no less than 5 minutes. The longer frosting is beaten, the fluffier it becomes.

Add desired food colouring at the end or leave as is. The mixture makes enough to frost 24-36 mini cupcakes and 12 regular sized cupcakes.

Results: The cupcakes are nice, I haven't made vanilla cupcakes previously so can't compare them to anything but they are light and fluffy which is always good. The frosting is sugary and sweet - perfect combination!! If you are piping the frosting which means a thicker layer of frosting, I suggest making a double batch of frosting so you don't run out, I'd rather have more than less!

Aspiring Domestic Goddess
I am a new Mum to a beautiful baby boy which has given me the time to explore my interest in whipping up culinary delights (or disasters!!). I am addicted to cooking shows and cookbooks, cooking forums & blogs and cooking magazines. So I hereby challenge myself to create exciting dinners, bake yummy treats and ultimately hunt down the perfect brownie recipe.